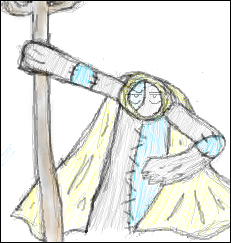 After the death of Trey, 91 and Oon decided to have another... little did they expect twins.Otto (pronounced Oh-to which is Italian for '8') is now the only brother that Dew, Kat (and their newest sister and his twin) and Sei have.

Otto gets along well with Oon and 91. When it comes to Sei, he's rather more protective over her than his older sisters. His lack of production often annoys Dew but despite that, they both get along well. Kat reminds him of himself when he was younger so he is easily able to relate to some of her habits. In the end... he's protective of his sisters...

When Otto was a child, his personality seemed to mimic Oon, for he couldn't seem to sit down. Even if he wasn't interacting with anyone, Otto was still doing something. However, this all changed after his upgrades for he became rather laid back and easy going; now taking a few characteristics from 91. Otto also picked up the habit of pacing, nobody is really sure why he paces but it's most likely to think. If anyone were to offend/insult his family... it's not a pretty picture. For some strange reason, Otto is quite tall (about half a head taller than Trey). He, like 91, sports a rag for a cape (though his is yellow). Otto begins to learn how to fight and as a gift, 91 gives Otto 19's fork.

Whenever You Breathe Out, I Breathe In (Positive Negative) by Modest Mouse

Community content is available under CC-BY-SA unless otherwise noted.
Advertisement